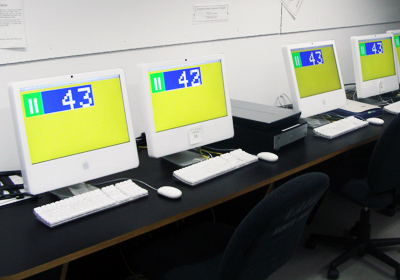 Infinite C is a suite of four-second songs composed in C major and played back in random order.

This browser-based sequencer accepts Play and Pause commands at four second intervals, indicated by an occasional music note icon. Open multiple copies on one machine or open copies on multiple machines at once.

Art From the Middle of Nowhere 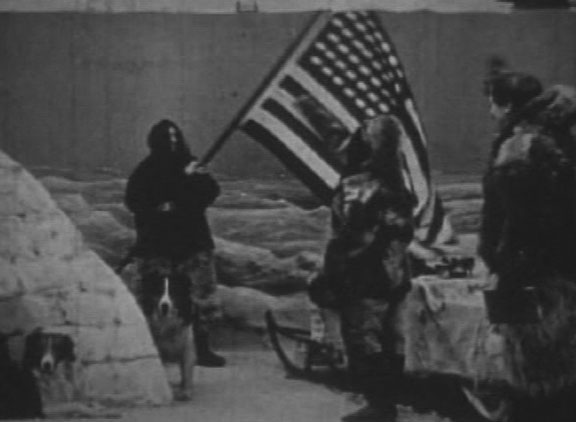 Paul D. Miller, the artist, remix theorist, and DJ parenthetically known as DJ Spooky, is among the latest flood of artists to take interest in Antarctica. Representing the world's highest, driest, and coldest desert, the often misunderstood continent lured some of the film medium's earliest documentarians who were in search of something new and continues to entice new media artists concerned about its disappearance. Those who are liberal in their use of the word "remix" might say that this long-contested territory is now being remixed. In a sad twist of irony, the continent with no permanent residents has fallen victim to the environmental effects of global human pollution. Paul Miller's work grows out of DJ culture and a love of music, but has in recent years been concerned with the evolving relationship between media and culture. In 2004 he remixed Birth of a Nation, D. W. Griffith's white supremacist feature film that nonetheless propelled cinema as an art form. In his new North/South installation, the artist responds to material ranging from filmic narratives about polar expeditions to John Cage's Imaginary Landscape #1 (1938)--which he cites as the first-ever turntable composition--to tell his own story about Antarctica. The work exhibited is presented as an acoustic interpretation of the continent's place in international politics, and the "Great Game" of national interests as states claim territory and define their identity. A timely topic, considering Russia planted a flag in the North Pole's seabed to claim the natural resources underneath it. The show opens tonight at New York's Robert Miller Gallery. - Marisa Olson

Processing, the open-source programming language and production environment developed by Ben Fry and Casey Reas, turned 1.0 yesterday. While it started off as tool for sketching and teaching the fundamentals of programing, Processing has developed into a full-fledged alternative to expensive proprietary software for the creation of everything from data visualizations and interactive installations to music and video. In just 7 years, Processing has grown into one of the primary tools used by contemporary artists working on digital projects, and stands as one of the finest examples of the power of open-source development.

Read more about the 1.0 Release on Casey Reas' blog.

Ceci Moss | Thu Nov 20th, 2008 noon
(0)
Share
Performative fail from rosa menkman on Vimeo.
This video is made with the help of a collection of failing hard drive sounds, while the video is a combination of failed pdf screengrap videos.
More work by Rosa Menkman

Statement: Radio Astronomy is an art and science project which broadcasts sounds intercepted from space live on the internet and on the airwaves. Listeners will hear the acoustic output of radio telescopes live. The content of the live transmission will depend on the objects being observed by partner telescopes. On any given occasion listeners may hear the planet Jupiter and its interaction with its moons, radiation from the Sun, activity from far-off pulsars or other astronomical phenomena.

Statement: Stephen Vitiello's first solo project for the web, Tetrasomia presents intriguing web-based archives of sounds from the natural and physical world, including such sounds as a fruit fly courtship, an underwater volcano, and poison frogs, as the source for an interactive sound project. Tetrasomia also features four new sound compositions by Vitiello: Earth, Air, Fire, and Water.

Artist's statement: Laps is an audio and visual installation that uses Internet as an imaginary space where sound echoes, reverberates throughout the Web. Based on transmission errors, the sound material is shaped by the virtual acoustic space of the network. Sound streams broadcasted within the installation structure gradually echoes the activity of the Web in various locations of the globe. Its analysis in these various points is used to progressively draw the contours of an imaginary landscape inside the installation.