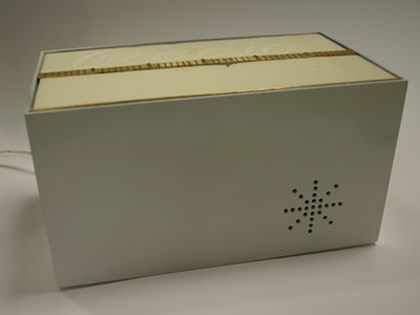 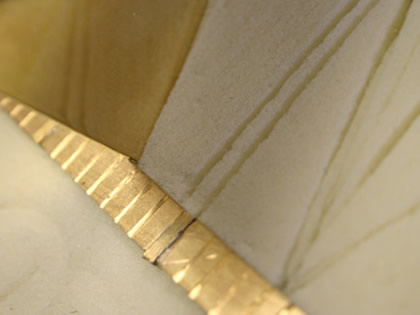 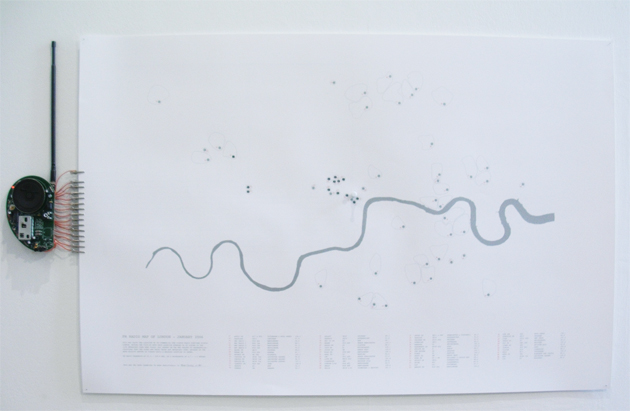 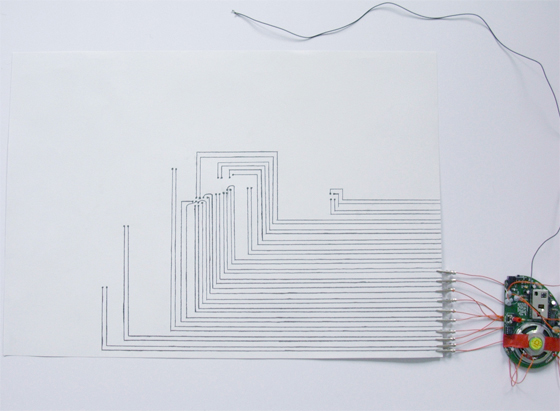 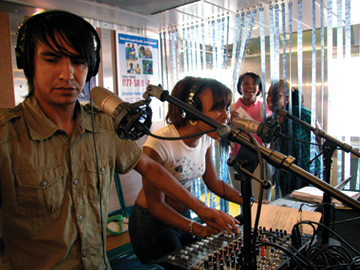 Shared Frequencies is a portable sound installation and performance environment that relies on multiplex radio communications events as its primary performance material. An array of radio scanners is paired with a set of analog synthesizer modules, and assembled on a set of small, modest folding tables. The scanners pick up a wide variety of speech, encoded data streams, and noise that are converted into (more) synthetic sound. The results of these electroacoustic interactions are projected into the air, and the sounds heard are physically modified by the shape and volume of the installation's site. 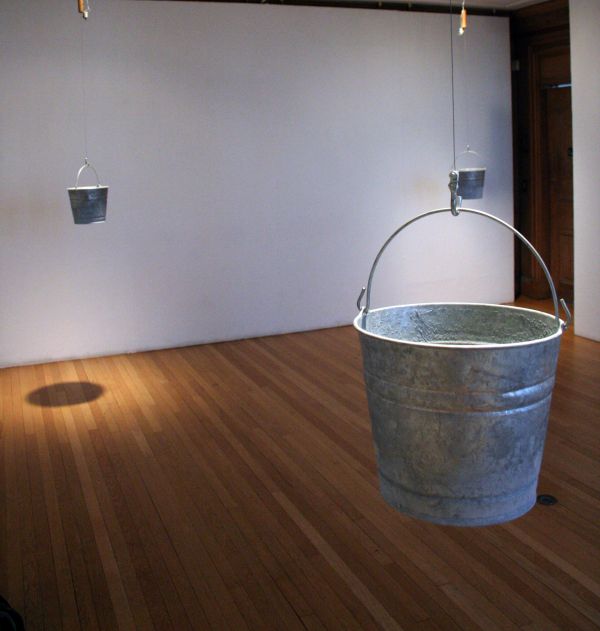 The Night Sounds by Shawn Decker 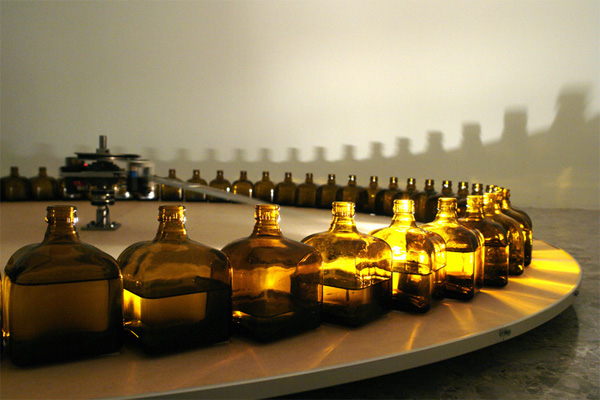 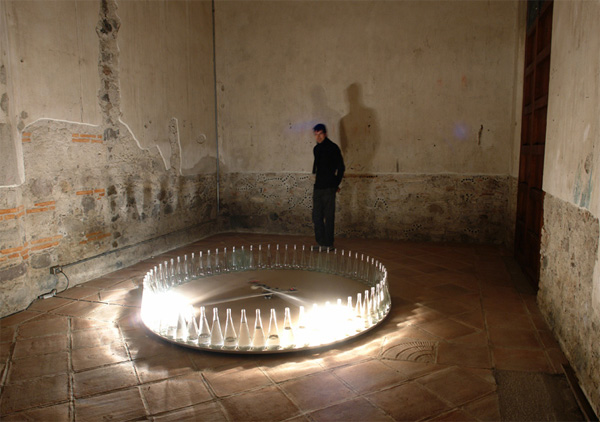 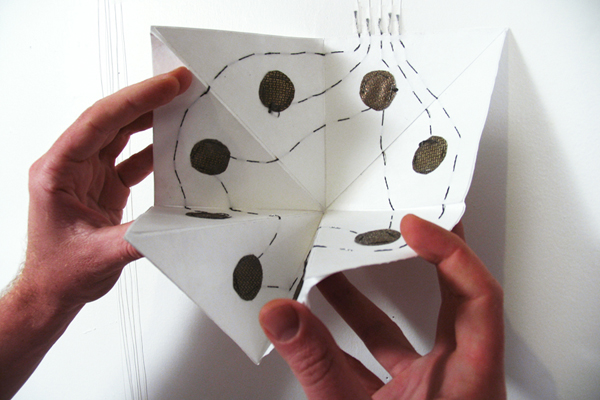 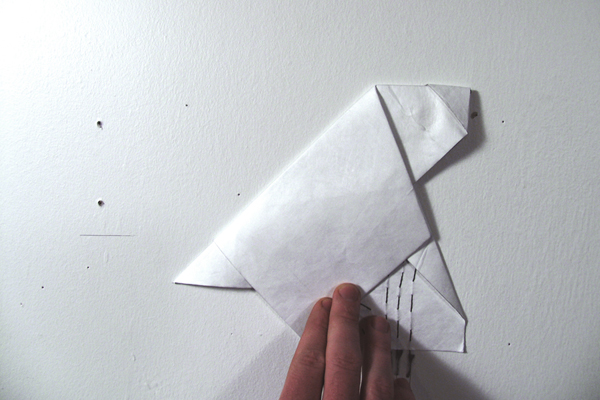 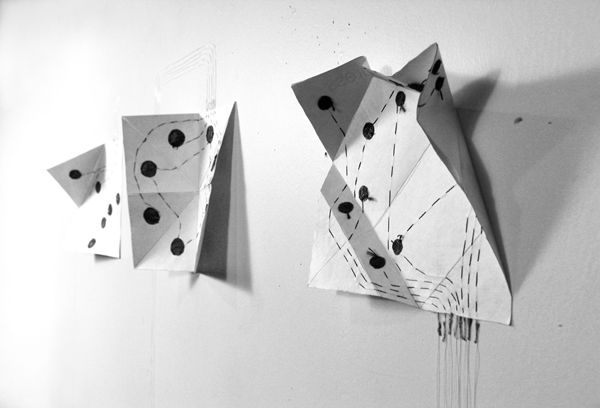 Fold Loud is a (de)constructing musical play interface that uses origami paper-folding techniques and ritualistic Taoist principles to give users a sense of slow, soothing relaxation.

Playing Fold Loud involves folding origami shapes to create soothing harmonic vocal sounds. Each fold is assigned to a different human vocal sound so that combinations of folds create harmonies. Users can fold multiple Fold Loud sheets together to produce a chorus of voices. Opened circuits made out of conductive fabric are visibly stitched onto the sheets of paper which creates a meta-technological aesthetic. When the sheets are folded along crease lines, a circuit is closed like a switch. Thus, the interface guides participants to use repetitive delicate hand gestures such as flipping, pushing and creasing. Fold Loud invites users to slow down and reflect on different physical senses by crafting paper into both geometric origami objects and harmonic music.

The arrangement includes six exceptional exhibits from the world of sounds and acoustics. At first sight looking trivial, each object incorporates a very unique ability.

The magical character of each object is accompanied with a little story, almost completely concealing the existence of technical components such as speakers or sensors. Only small connection ports as well as the uniform black finishing point to thier unusual abilities.

In form and functionalty all these exhibits pursue John Maeda’s "Simplicity". They are enjoying to use, they are surprising and one wants to explore and investigate them.

-- DESCRIPTION FROM THE PROJECT STATEMENT

A Conversation with Samson Young and Yao Chung-Han

The exhibition "Resonance" was initiated in early 2010 as an experiment in the conceptual underpinnings and practical manifestations of sound art as a genre and form in contemporary greater China. Growing out of a series of readings and conversations in Hong Kong with artists as varied as Yan Jun, Feng Jiangzhou, and Zhou Risheng, the final exhibition program included two installations by artists Samson Young, an artist and composer based in Hong Kong, and Yao Chung-Han, a sound artist based in Taipei. This selection of artists allows the experiment to step beyond the mainland sound art and experimental music scene, which is largely incoherent in its current free-for-all exploration of new sonic forms--a site of artistic freedom indeed, but also a difficult territory in which to reflect on the modes of sound already in use in the contemporary art community. Samson Young contributed a piece entitled Beethoven Piano Sonata, nr. 1 - nr. 14 (Senza Misura) (2010), a series of open circuit boards hung in rows on the gallery wall. Each board houses two LEDs and a speaker, each marking the tempo of a single movement of fourteen of Beethoven’s early piano sonatas. In the second gallery room, Yao Chung-Han installed an audiovisual piece entitled I Will Be Broken (2010), a suspended column of circular fluorescent lamps tied together with power cords that illuminates in a semi-random fashion and emits a prerecorded sequence of sounds. The two pieces engage in a dialogue of light and sound that confronts the tension between sound as aesthetic spectacle and sound as conceptual material, opening a productive conversation between styles and historical developments in the trajectory of sound in art. "Resonance" is on view at I/O Gallery in Hong Kong until September 5, 2010.