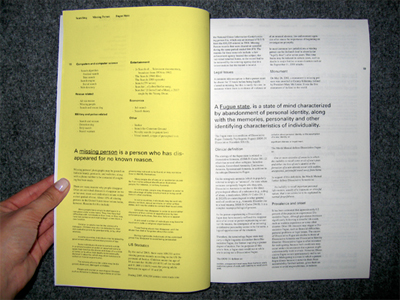 Artist Paul Klee once described drawing as "taking a line for a walk," though he could have just as easily been referring to ASDF's A Wikipedia Reader (2008). Assuming two forms - a limited-edition printed book and open-edition .PDF - this project stems from ASDF co-organizer David Horvitz's invitation to a handful of predominantly Los Angeles-based artists to play a "small game" with Wikipedia's navigational structure. The advent of digital information systems, Horvitz argues in the project's introduction, has made heretofore standard methods of categorization "almost irrelevant." Indeed, a virtual user's mode of accessing information relies upon the contingencies of a given search, a vastly less hierarchical mode of navigation that broadens the associative potential of a topic, instead of whittling it down. Horvitz invited eleven collaborators, such as Uta Barth, Laurel Nakadate, and Emilie Halpern, to choose topics reflective of their artistic interests and document their paths through related links. What ensues are relatively straightforward yet frequently lyrical journeys into the web�s collective memory hub, as Barth travels from "Dusk" to "Dawn" and, eventually, reaches "Polar Night"; Halpern grazes "FBI Ten Most Wanted Fugitives" and "Fibonacci" in a search that originated with "Esperanto"; and Horvitz, in a rather appropriate summation of the project's enterprise, encounters "Dérive" and "Flâneur" on a stroll that began with "Boredom" and ends with "Balloon Mail." Given the amount of time we spend in the virtual sphere, it's fitting that ASDF would deploy the methods of Situationists and psychogeographers to generate a permanent archive of a specific moment, topography and state of knowledge that, by the nature of Wikipedia, will continue to change and evolve. - Tyler Coburn 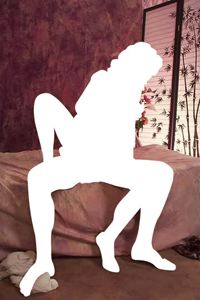