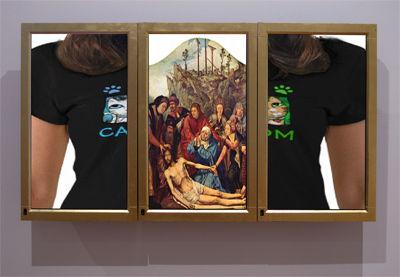 Triptych 2009 from siebren versteeg on Vimeo.

VIEW THE INTERNET THE WAY KANYE SEES IT. 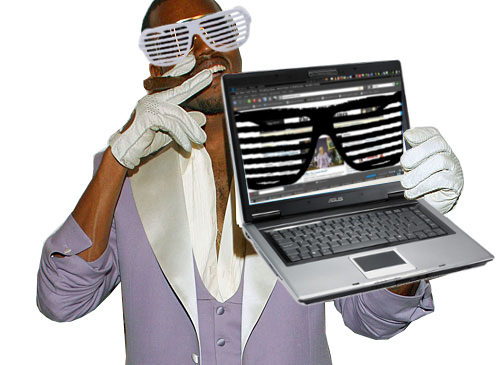 (This project is part of F.A.T. Lab's Kanye Webst Week where they will post "Kanye-West-Web-2.0 related original content" daily until May 17th.)

"In Real Life" at Capricious Space

Every weekend in the month of March, "In Real Life" took over Capricious Space in Brooklyn, NY with four-hour residencies by various art-related web sites. We felt the project stirred up some compelling ideas surrounding the presentation of online artistic activities within a gallery setting, and we attended as many residencies as we could. Finding a format to review everything that went on last month wasn’t easy. We eventually decided to crib the form of curator Laurel Ptak's statement, a conversation between herself and art historian Leigh Claire LaBerge over Skype, and exchanged our impressions of "IRL" over email.

Ceci: The first "IRL" residency I attended was the performance for Club Internet. Some have grumbled that this "performance" was boring -- just a bunch of people around laptops. But I stayed at the gallery for almost two hours, talking to Laurel about the use of (and resistance to) digital manipulation in commercial photography during the 1980s, the subject of her academic research that preceded her blog iheartphotogaph. I also had an interesting talk with Club Internet founder Harm van den Dorpel. I don't know if we really needed the gallery setting or even the production of Club Internet in the background to have that kind of dialogue.

Turn On, Tune In, Zoom Out

Kari Altmann is a Baltimore-based artist who initiated the collaborative project Netmares and Netdreams. She agreed to do an interview ahead of the project's residency on Sunday March 15th at Capricious Space in Brooklyn as part of the program In Real Life. - Brian Droitcour

Netmares and Netdreams is going to be featured "in real life" at Capricious Space in Brooklyn. How is this going to be different from the first incarnation of Version 3.0, at Current Gallery in Baltimore? What were some of the challenges you encountered when displaying an online project in physical space?

The opportunity to do version 3.0 of the show arose very suddenly. Current gave us just two weeks to put everything together. But I knew that if we didn't accept that challenge, we might never do the show at all. It wasn't ideal, but it was also perfect luck, because it needed to happen in a space like Current while we had some momentum. We just said yes and pushed through the limitations, which is how we do a lot of things.

Some netdreamers were confronted with the question of how to present things offline for the first time, and they needed to experiment with the options. We didn't have computers for the show, which I was okay with, but we also had zero budget and very limited gear. We wanted to make it the most “real” show we could without all the resources. A lot of things ended up as prints or videos. We debated over whether or not certain pieces still functioned in the way they were presented. If someone didn’t answer an email or send their piece in time, it would affect the way everything ...