Lisa Oppenheim is interested in how the present viewer sees media of the past, and to study this she takes materials from archives and transforms them with editing effects that distill her interpretation of how an image’s meaning changes over time. For a show at tank.tv, on view through July 21, Oppenheim has revealed her sources and processes in texts accompanying five of her moving-image works. E-M-P-I-R-E reconstructs Andy Warhol’s eight-hour film of the same title using a single 100-foot roll of 16mm color film. “Unlike Warhol’s endurance test of extended filmic boredom, this version uses the language of structuralist ‘flicker’ films of the late 60’s and 70’s,” Brian O’Connell writes in an essay excerpted on tank.tv. He goes on to inform us that the rhythm of the flickering Empire State Buildings spells out “E-M-P-I-R-E” in Morse code—a system as obsolete as 16mm film. Explanations like these never hurt, but Oppenheim’s work is stronger when the transformation of an image over time is a compelling sight in itself. The two channels in Story, Study, Print (2005) juxtapose children’s posters used in predominantly African-American schools in the 1970s with a disconnected sequence of still and moving images; here, chance and obscurity force viewers to form their own associative links rather than relying on a statement to decode meaning. In Yule Log, 2008, a soothing image of a fireplace at Christmastime deteriorates through several repetitions, each one a 16mm copy of the last, while The Sun Is Always Setting Somewhere Else (2006) is a slide show where each frame shows a hand holding snapshots of a sunset ...

When television stations in the U.S. switched to digital broadcasting last Friday, viewers across the country documented the event and uploaded it to YouTube. There is something curiously surreal about these grainy videos of television screens switching to static, taped in people's homes on cell phones and digital cameras, only to be posted on YouTube moments later. The novelty of their circulation itself - a historic transition from analog to digital television captured on digital video and then transmitted online - speaks to the media environment we inhabit with accidental precision. 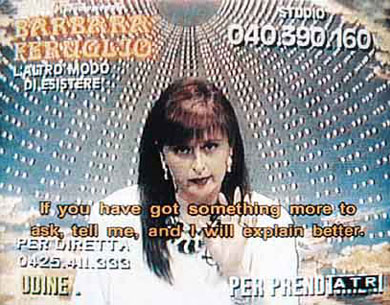 With the work Telemistica, Jankowski plunges into the medial world of the Italian local TV. Speaking live on telephone with several TV-fortunetellers he asks questions about his forthcoming artwork. The TV sequences are recorded and are Jankowski's later artwork. Here the mystic not only lays in the private prophecy but gains significance within the work as it prophecies itself.

-- FROM THE ARTIST'S PAGE ON KLOSTERFELDE'S SITE