Rick Silva's La Région Decentralized is featured this month on The Download. 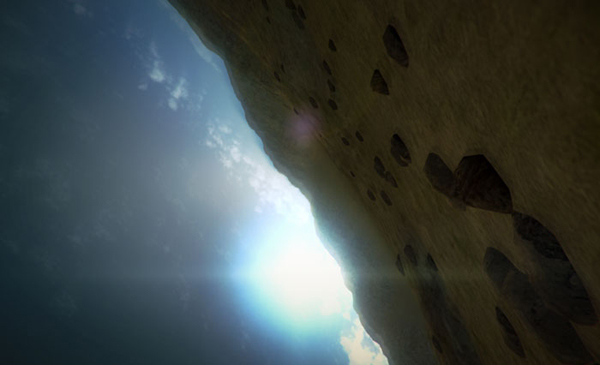 Still from La Région Decentralized, image courtesy of the artist

Nature and land are prominent subjects in your work. Could you speak a bit about your interest in nature? Do you spend a lot of time outdoors?

Working with nature and land feels natural to me. Nature and land are part of a larger fascination I have with perception, light, and time. I do spend a lot of time outdoors, my new project/blog En plein air http://enpleinair.org is all about that actually. For the project I’m taking my laptop outside and seeing what I can create while reacting to the immediate landscape and elements.

For your piece in The Download, La Région Decentralized, you explore and remix iconography of Michael Snow's 1971 experimental film La Région Centrale in a endless, self-playing video game. What about Snow's film fascinates you?

I’m interested in Snow’s use of a rotating camera/horizon. Spinning terrains are a reoccurring theme in my recent videos. Texts about La Région Centrale suggest that the camera/horizon movement in Snow’s film creates a cosmic perspective of space at the human scale, and I agree with this reading. My video game version adds an endless random time component to this idea as well.

Is La Région Decentralized your first time working with video-games as a medium?

In 2010 I used video game engines to generate scenes and imagery for video projects. I’ve used 3D spaces like Google Earth for projects since 2005 with my Satellite Jockey performances, but this is the first time that I’m releasing a game as an application. There is something very interesting in the stretching and randomizing of time that video ...

Clement Valla and John Cayley's Hapax Phaenomena is featured this month on The Download. 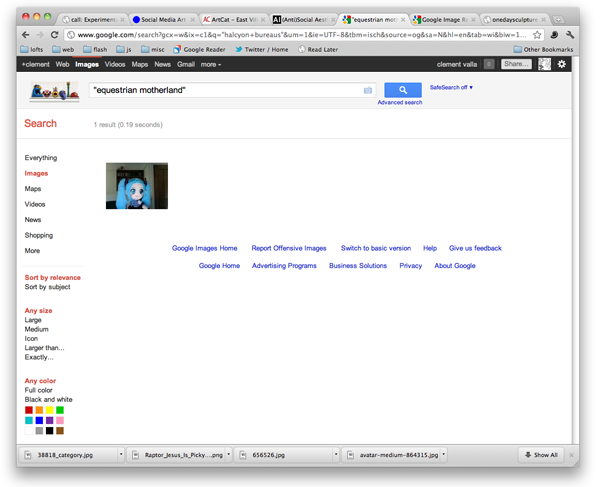 In Hapax Phaenomena and other projects such as Google Earth Sites, you refer to your art objects as artifacts or curios. Do you see yourself as an observer documenting an endangered technological curiosity?

Yes. These things will all disappear, and probably soon, in the name of progress. These artifacts are atypical ephemera, and often accidental products created by various internet algorithms.  There is very little direct human hand in these artifacts. Though the purpose in collecting them is not simply for their preservation. It's more about framing them, allowing them to be seen, and showing a kind of bizarre byproduct of these super-functioning and useful systems, such as Google.

When did you first notice the glitch in Google Earth? What inspired you to begin capturing these surreal moments?

It was accidental. I was Google-Earthing a location in China, and I noticed that a striking number of buildings looked like they were upside down. I could tell there were two competing visual inputs here - the 3d model, and the mapping of the satellite photography, and they didn't match up.  The computer is doing exactly what it's supposed to do, but the depth cues of the aerials, the perspective, the shadows and lighting, were not aligning with depth cues of the 3d earth model. I figured that this was not a unique situation in Google Earth, and I started looking at obvious situations where the depth cues would be off—bridges, tall skyscrapers, canyons. Soon I noticed the photos being updated, and the aerial photographs would be 'flatter' (taken from less of an angle) or the shadows below bridges would be more muted. Google Earth is a constantly ... 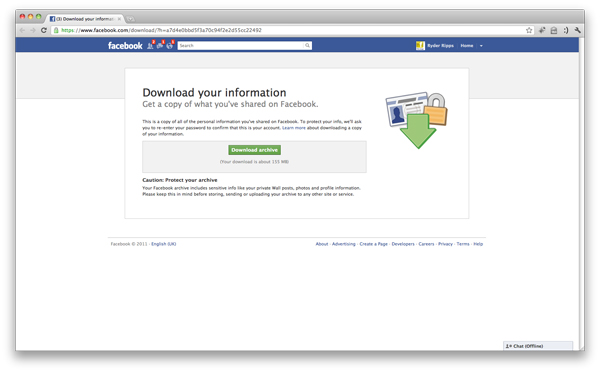 In-process screenshot of Ryder Ripps's Facebook, courtsey of the artist

Last week, we kicked off our annual Community Campaign with the announcement of a new program for Rhizome members called The Download. Through The Download, Rhizome members are invited to get a first look at a new and significant artwork by one artist every month. Artworks will come in a variety of ubiquitous file formats such as .gifs, .html, .mov, and .jpegs. All works will be delivered as a .zip via The Download page. Once the artwork is downloaded, it is yours to collect, share with friends, and display on the screen of any suitable device. The Download is a premier opportunity to become a collector of great digital art!

For the first Download, we are highlighting a new work by conceptual artist Ryder Ripps (Internet Archaeology, dump.fm and OKFocus). Ryder Ripps's Facebook (2011) is a copy of his entire personal Facebook history including all of his photos, private messages, chats, and wall posts. The viewer is invited to explore all of Ripps's Facebook activity, exposing some of the most intimate and private information. As with previous works, this project confronts issues of privacy, Facebook, and fetishization of technology. Read more about Ripps's work on The Download page.

Next month, we will feature a new work by video artist Sabrina Ratté including music by Roger Tellier-Craig, aka Le Révélateur. Look out for more information about upcoming featured artists in the next few months.

The Download is supported by the Artist Fund, a pool of financial support generated by our members that is divided evenly among the participating artists. You can learn more about The Download and the Artist Fund on the FAQ page.

If you would like to be able to receive The Download first-hand and directly support artists, please contribute to Rhizome's Community Campaign and the Artists Fund today!