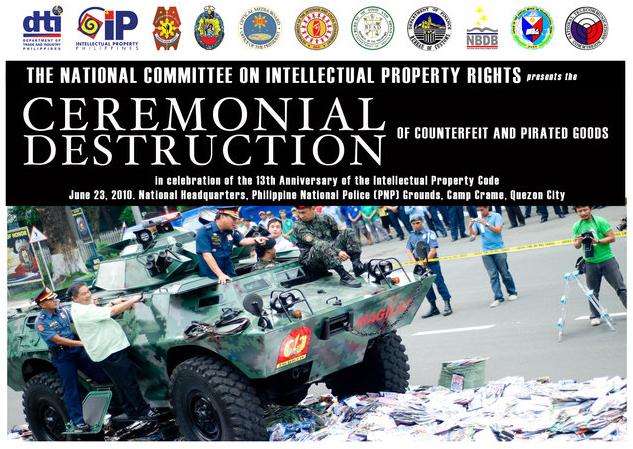 Advertisement for destruction of pirated media in the Philippines.

Surely the irony wasn’t lost on Maulana Fazlullah when he took to his FM channel to tell his supporters to burn their radios. But Radio Mullah—as he fast became known—was just preaching on his shortwave what the incumbent Islamist government had set in motion on the streets of the frontier province. In 2006, the Muttahida Majlis-e-Amal (MMA) government in Pakistan's provisional district of Khyber–Pakhtunkhwa had begun cracking down on ownership of electronics and recordings of all kinds. Muhammad Arif of the Center for Peace and Cultural Studies Peshawar remembers what happened when media products were suddenly found to be profane: "CDs, Video Cassettes and other gadgets were burnt on the directives of the provincial government. There were clear directives from the MMA government to remove 'obscene' material from the shops and the police had to prove their efficiency." Ordinary people—not only the most devout—and, in some cases, even the police, attended the ceremonies.

Having consisted primarily of local cassettes, videotapes, and VCDs, the MMA government's own bonfire of the vanities did not garner much media attention. Whether it's the looting of Egypt's Museum of Antiquities, the United States’ desecration of Mesopotamian sites in Iraq, the Taliban burning of the Afghanistan National Film Archive, or the torching of historic manuscripts in Timbuktu, the international community can generally be counted on to mourn the destruction of listed sites and priceless objects. But this is not the case when it comes to the destruction of contemporary digital or electronic cultural artefacts, which often receives the tacit approval of the international community as an essential part of the war against piracy. By shredding the "counterfeit" electronic media of their citizenry, governments of emerging markets signal their willingness to participate in a global economy and stage their official identity, while sacrificing the media archives of the future.