The Peace Learning Archive in OKINAWA

We launced The Peace Learning Archive in OKINAWA.
http://peacelearning.jp/

The Peace Learning Archive in OKINAWA lets its users to read 20 testimonials by survivors of the Battle of Okinawa, and to view 182 photographs and archived maps. Several digital archives are multi-layered on the Google Earth map to facilitate multilateral and comprehensive understanding of the Battle.

The Peace Learning Archive in OKINAWA is a culmination of the creation methods of “pluralistic digital archives” established with the workings of the archives related to Nagasaki, Hiroshima, and the Great East Japan Earthquake. Information regarding time and space are supplemented to all of the testimonials and photo materials and it allows the user to freely move about in the skies of Okinawa in the 1940s for a deeper understanding of the actual circumstances of the Battle of Okinawa. The website is devised to allow the user to view the video and text for each of the testimonials. Additionally, photo data are carefully laid out and arranged to replicate as precisely as possible the conditions at which the photos were taken. We hope that the visitors to the website will take the opportunity to view our archives and retrace the steps of the days past and walk through memories that shall not be forgotten.

“eARthquake 311” is an iPhone AR Apps version of a pluralistic digital archive - “The East Japan Earthquake Archive”. Download for free. For iPhone / iPad.

The Map Mode that displays data by using Maps. Data are displayed by touching markers. And more, in Japan, Users can know the situation caused by The East Japan Earthquake in March 11, 2011 using a GPS function.

By using “The AR (Augmented Reality) mode”, Data can be displayed by AR overlapping with actual cityscape. The user can know the distance between stricken areas and current location. 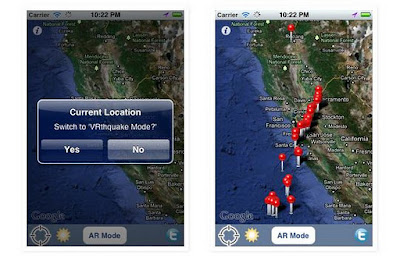 At places other than Japan, A user's present location can be set up as “VRthquake” place. So the scale of the damage caused by Earthquake can be understood by AR overlapping with user's own town.

“eARthquake 311” has a function of Twitter. The hashtag “#japan311” is attached to user's tweets. Communication between users is urged by this function.

Thank you very much,
--
Hidenori Watanave 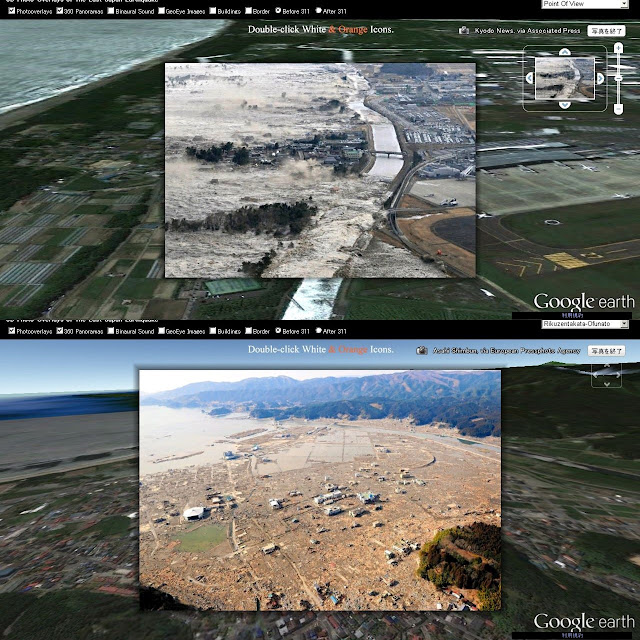 “The East Japan Earthquake Archive (3D Photo-overlays of The East Japan Earthquake)” is a mash-up content to understand the real state of affairs of the Japan Earthquake that cannot be understood by inspecting individual photographs. Users can view over 100 photographs from New York Times and others using google earth, and compare sceneries before / after the earthquake. All photographs are overlapped with three-dimensional geographical features, so the damage situation of the Sendai airport and the Fukushima nuclear power plant and others can be understood three-dimensionally. And also, Google's imagery update of Japan is included, users can switch latest and past satellite image by radio-buttons. We will add more photographs as much as possible. 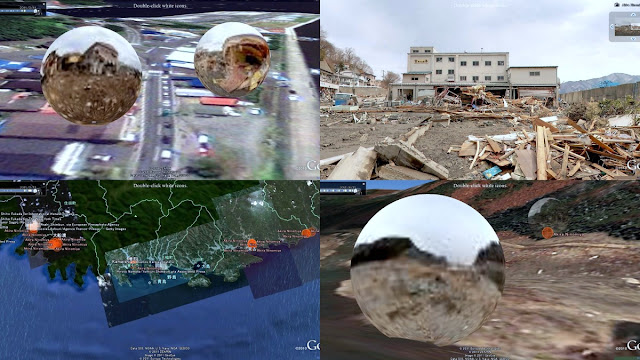 Now we launched Hiroshima Archive that is a digital archive aboutHiroshima Atomic Bomb. “Hiroshima Archive” is a pluralistic digital archive using the digitalvirtual globe "Google Earth” to display on it in a multilayered wayall the materials gained from such sources as the Hiroshima PeaceMemorial Museum, the Hiroshima Jogakuin Gaines Association, and theHachioji Hibakusha (A-bomb Survivors) Association. Beyond time andspace, the user can get a panoramic view over Hiroshima to browsesurvivors’ accounts, photos, maps, and other materials as of 1945,together with aerial photos, 3D topographical data, and buildingmodels as of 2010. The archive aims to promote multifaceted andcomprehensive understanding of the reality of atomic bombing.
- A description in English / Japanese
- Interface in English （About 50 victim's stories are translated）
http://hiroshima.mapping.jp/
EVENT
Posted on Sat Apr 02, 2011

Visualizing the damage situation of the Japan Earthquake

1. 3D photo-overlays from "The Aftermath in Japan" by New York Times 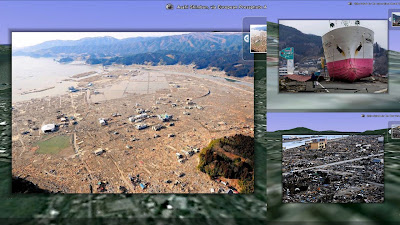 Users can view 40 photographs from "The Aftermath in Japan" by New York Times using google earth, and compare sceneries before / after the earthquake. All photographs are overlapped with three-dimensional geographical features. The damage situation of the Sendai airport and the Fukushima nuclear power plant and others can be understood three-dimensionally.  And also, Google's imagery update of Japan is included, users can switch latest and past satellite image by radio-buttons. We will add more photographs as much as possible. >> http://shinsai.mapping.jp/photooverlays.html 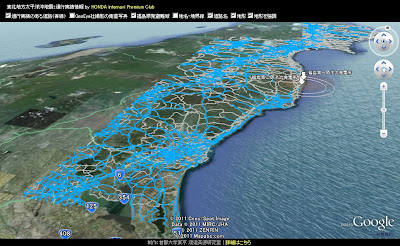 The traffic results information of the area of devastation of the
Japan Earthquake (daily update) by HONDA and TOYOTA are overlapped with other geographical data. Available roads and other information are overlapped, so users can understand the real situation of the area of devastation easily. Two or more layers can be switching with check boxes. Please wait for a while until contents are displayed because the data size is large. We can mash-up other layers. If you have some requests, please contact us. >> http://shinsai.mapping.jp/