Michelle has exhibited and lectured across North America and Europe. She has appeared in publications such as Wired UK and on radio and television broadcasts on the BBC and CBC. Most recently she has delivered lectures at Argos (Brussels), PICNIC (Amsterdam), The Lighthouse (Brighton).

Following a decade of practice as a visual artist, her current focus is primarily on writing and curating. In 2006, she was awarded a curatorial research residency at the Nordic Institute for Contemporary Art in Helsinki, Finland, in 2010 she attended the Summer Seminars for Art Curators in Yerevan, Armenia, and in 2011 was a guest of the BAM International Visitor’s Programme in Flanders. In 2006, Michelle founded a leading blog on the subject of curating contemporary art, Curating.info, which was featured in the LabforCulture publication, Cultural Bloggers Interviewed. She has written critical essays for C Magazine, Volume, Spacing, CV Photo, Public, Mute, and several online journals on a wide range of subjects in the realm of contemporary culture. Her writing has appeared in anthologies and exhibition catalogues in both Canada and Europe.

Michelle completed her BFA in New Media at Ryerson University, Toronto, Ontario in 2000, and in 2006 completed her MA in Visual and Media Arts from the Université du Québec à Montréal, earning several scholarships over the course of her academic career. She is a member of IKT (International Association of Curators of Contemporary Art).

You can find out more about Michelle's projects, talks, and essays at http://michelle.kasprzak.ca.
BLOG POSTS
Published on Wed Mar 30, 2011

The sixth Video Vortex conference was held in Amsterdam at Trouw, a building that used to house the printing presses where the eponymous newspaper was created. These days, Trouw is a restaurant and club and occasional conference venue. The venue’s former purpose reinforced the passing of the torch from old news media to the online media being discussed, alongside other relevant topics, at Video Vortex. Michael Strangelove, the first speaker of the day, referred to the “holocaust of capitalism” and how online video enables a subversion of the notion of culture as private property. As newspapers struggle to redefine themselves in this online era - the New York Times’ new paywall being a prime example - the war of ownership over content resonated not only throughout the conference sessions but even in the venue’s inkstained floors.

The initial speakers of the day, Michael Strangelove and Andrew Clay, made salient points about the notion of “compulsory visibility” (Foucault, via Strangelove) online, the “douchebag effect” induced by online video platforms (Strangelove), and the communities and revenue streams which develop around online smash hits such as Annoying Orange (Clay). Talk of douchebag effects and inane chattering fruit was unfortunately juxtaposed with the gravity of the tragic earthquake and tsunami in Japan, unfolding at the very same time. All morning, YouTube quickly populated with shocking videos of the damage, and it seemed immediately inappropriate to ponder how many millions Annoying Orange makes. 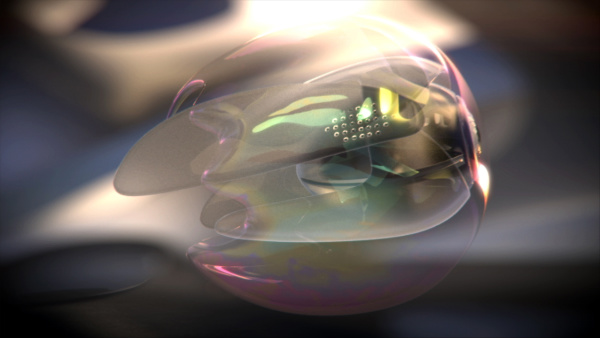 Recently, Adobe Systems Incorporated released a new product. Not an update to its existing suite, which include tools of the online trade such as Photoshop, Acrobat Reader and Flash, or some new software to fulfill ever-evolving creative needs. Instead, it is an online destination for viewing digital art entitled the Adobe Museum of Digital Media (AMDM). 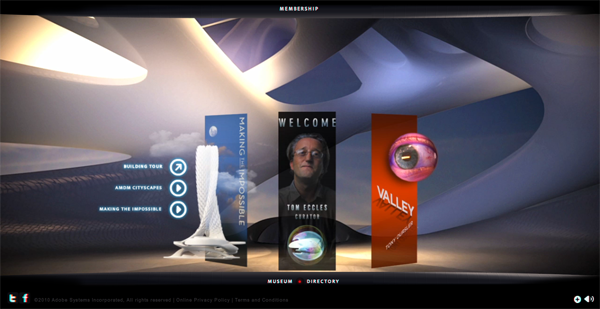 After waiting for the museum to load, you are greeted by a tour guide with a peculiar accent, whose likeness resembles a cross between a jellyfish and an eyeball. The museum has one current exhibit, a specially-commissioned piece by internationally acclaimed artist Tony Oursler, who is best known for his disconcerting projection installation works. As the museum has just launched, there is a limited amount to see: plans for the “building”, a chat with the curator, Tom Eccles, more chatter from the jellyfish-eyeball, the commissioned artwork by Oursler, and a comments section.

Before getting into the details of the museum itself, it is worth interrogating why it is considered by its creators to be a museum at all. The press release states the mission of the museum to be “...an interactive venue to present and preserve groundbreaking digital media works, inspire creative ideas and experimentation, and provide a forum for expert commentary on how digital media influences culture and society”. The mission is sound, but except for the word “preserve” there is little in it that specifically invokes the mantle of “museum”. As the AMDM is an obvious marketing exercise which promotes the use of digital tools (that Adobe happens to create), it’s a short leap of logic to conclude that “museum” was simply decided on as a word with greater impact than “gallery” or “showcase”.

The Social In Question: Review of Futuresonic 08

As I enter the conference space, I wonder if I'll be tempted to update my Facebook status constantly at Futuresonic '08. Many of my Facebook friends are here, but still I can't resist tapping on my EeePC from time to time: Michelle is happy in Manchester. Michelle has an idea. Michelle is in love with Dirt Party! Michelle is taking a leisurely pace.

Right now, I suppose I should change my status to: Michelle is writing a review of Futuresonic 08, a five-day festival of art, music, and ideas in Manchester, UK. Futuresonic is an established festival that often showcases emerging issues in creative industries, and this year's topic "The Social" took form both online and offline, and sometimes in between.

transmediale.08 invited attendees to "conspire" and, over the course of the festival, the possibilities inherent in this invitation were thoroughly explored. From semi-secret off-site events to the constantly idling black cars at the entrance to invoking the name of the mysterious Bilderberg Salon to key works in the exhibition and topics in the conference, the many nuances of the theme presented themselves with clarity and consistency.