Supporter
Nick Hasty
Since 2006
Works in Brooklyn, New York United States of America
BIO
Nick Hasty is an artist, programmer, consultant & musician. He was the Director of Technology for Rhizome.org for nearly 5 years. As an artist, he recently collaborated with Ryan Trecartin in building the user-generated video art platform riverthe.net, and he plays drums and electronics in the Brooklyn-based band Source of Yellow. He received a B.A. in English Literature from the University of Georgia, and holds a Master's degree from NYU's Interactive Telecommunications Program in the Tisch School of the Arts.
BLOG POSTS
Published on Tue Sep 13, 2011

As well, staff writer Ceci Moss will be presenting a paper entitled “Viral Not Virus: Alan Liu’s “Viral Aesthetics” Reconsidered” at The Matter with Media, Saturday, 17 September. That same day, she'll also perform a sound composition using recordings of the human voice found on the web during the conference as part of the performance panel, Soundwwwalk.

If you're in Istanbul, be sure to checkout our panels and say hello.

I'm pleased to introduce the Rhizome Staff Blog. This will be the channel for the Rhizome staff to communicate what's going on here at Rhizome HQ. We'll be posting about updates on the website, such as new features and scheduled maintenance, and what each staff member is up to, including current projects and research interests.

So on that note, I'm pleased to make two announcements:

1) A new, much needed "about" page for the ArtBase
We've been working hard behind the scenes to turn the ArtBase into the leading archive of digital art, and we want to provide more context about the ArtBase as a whole. The About page contains information on our mission, our philosophy, our archival process, and links to documents written about the ArtBase and archiving digital art.

2) Beta no more!
The new site has been running pretty smoothly for a while now, and I feel like we're safe to remove the Beta label from the site. Thanks to everyone who has provided feedback and help so far. Onward and upward!

We'll be posting new entries to the Staff Blog about once a week, and you can expect to hear from all of us in due time.

As you may have noticed, Rhizome.org re-launched this week and I’m truly thrilled to share the new website with you firsthand.

We didn’t just re-design the website; we re-built it entirely from the ground up and reverse-engineered fifteen years of content—a massive task that unfolded just under two full years. Our goal for the new website was three-fold: First, we felt it was a priority to upgrade Rhizome’s archive of art—the ArtBase—and make it a better platform for participating artists, as well as curators, students, and everyone who wants to learn about this field. Second, we wanted to improve the overall website, by making it more rich, dynamic and browseable, especially our community-centered sections such as “Announce” and “Discuss”. Finally, we wanted to adjust our membership policy, shifting it away from granting access (now, all art works in the ArtBase are free to view) and onto advanced features. Developing the site was a major undertaking, and involved late nights and weekends on the part of a small team for nearly a year.

I’d like to highlight a few significant new features to you:

§ The ArtBase now allows artists to represent their work in much greater detail, thanks to a more elaborate metadata schema, greater storage possibilities, and the ability to upload bigger and better images.

§ We created more and better ways for our community to interact with ArtBase works, like leaving comments, "favorite-ing" works, curating them into exhibitions, and sharing them online via other platforms like Twitter and Facebook.

§ Last, we upgraded all sections of the site, from portfolios, to discussion, to announcement. We took in feedback we got from you, and tried to make each better.

We did it for you, Rhizome’s community, and we really hope ...

Now that everyone is out of business cards and has had enough time to check in to their locative media apps, I think we can begin to make sense of the social and technological deluge that was the South by Southwest Interactive festival. After being deep in a web development hole for the past few months, what I took away from the conference was a rejuvenation of critical, big-picture questioning, a reminder of just how drastically technology is contouring contemporary society and culture and that, ultimately, it is still in our hands to determine the overall shape of things to come. Although a late arrival and scheduling conflicts prevented me from hearing everyone I'd have liked to have heard (Douglas Rushkoff, Gary Vaynerchuk, among many others), I was able to take in most of the keynote speakers and the panels whose subject had some impact or connection to the arts (which were few). Here is a synopsis of the projects, presentations, and people that resonated with me the most.

Art, Design, and the Arduino: a lineage 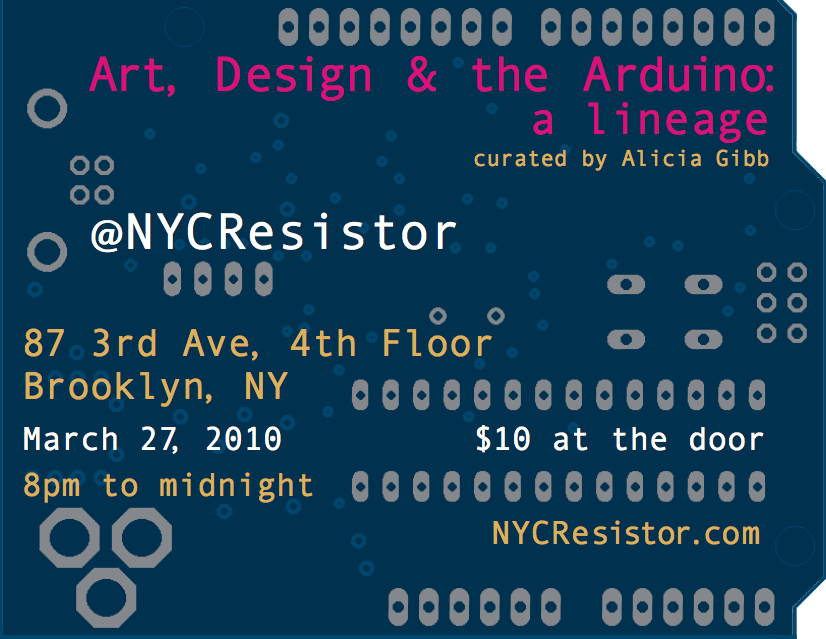 This Saturday, NYC Resistor hosts "Art, Design, and the Arduino: a lineage." Works include a lineage of variations, modifications and relations to the Arduino microcontroller by the following artists:

This show is curated by Alicia Gibb, based on the work of her master’s thesis

Flash and Quicktime are still supported and should work via the bb code ( & ).

I apologize for my lateness to this discussion, but it came up right when I was leaving on a much needed holiday. I wanted to address some of the specific issues brought up about the discussion section, and I'm gonna be making improvements to the discussion functionality as you've all suggested.

@Curt Cloninger- "It seems to me more a matter of decreased moderation, increased prominence, and increased ease of use."

Moderation - The only posts we "moderate" are spam posts made by advertisers trying to get link backs, so if you're post contains a link, I just have to look at it first. If this policy wasn't instated and spam posts with links weren't blocked, the discussion section would quickly fall apart (as it nearly did when we were first hit by the wave of spammers). Unfortunately, our open policy towards discussion in the past was what brought a massive amount of spammers to the site in the first place. We had to quickly create a blunt but powerful tool to block the massive amount of spam that was hitting the discussion section.

These actions and choices have resulted from purely administrative decisions without political or aesthetic intent. If we didn't block these spam posts, google and other indexing sites would probably give us a very low site rank as we would appear to simply be a spam depot. Furthermoe, I received many complaints about the spam, so I'd say that there are many people who are happy to have it gone. I'll work on loosening things though so that conversations can take place closer to "real time".

Prominence - I've put discussion posts on the front page in a prominent place and I agree that they should have been there in the first place, but were probably taken down a few months ago when the front page got too busy. This was something that needed to be addressed, so thanks for pointing it out Curt.

@Curt Cloninger- "When I post, I need to see a confirmation that I've posted instead of just being returned to the thread as if I haven't posted. Better yet, I need to see my post immediately appear."

I agree with you Curt, and unfortunately when I had to patch things together when beefing up the discuss code to block the spammers, the confirmation notice that pops up when you reply to a post had to be sacrificed. But you are right, it should be there, and I'll work to bring it back. I'll also make posts appear quicker for those of you who post often.

@Curt Cloninger- "Personally, I think the discussions should be uber-easy to use, uber-unmoderated, and uber-prominent. This is an obvious risk that most institutions are unwilling to take, a bit like featuring unmoderated inmate poetry in the asylum newsletter. It will increase both the signal and the noise; their ratios will fluctuate, but at least people will be posting again. Maybe the noise will become more interesting than the signal. Whatever the case, it will be the antithesis of hierarchical moderation and curation. Is it possible to curate a space that is purposefully left uncurated? Will senators ever vote to decrease their own salaries? Are you willing to let it devolve and grow holes like socks? Perhaps even open up html/css posting capabilities so that threads could be purposefully visually hijacked and formally restructured. "How can you kill me; I'm already dead."

I really like this idea, actually, though I don't think the discuss forum is the right place to execute it. Maybe in the future we can open up a space for this, but right now, given our resources and work overhead, this space will have to wait. We do have some things in development though, and we plan to open up a discussion on how these thigns will develop so that our community can have input on the future of the site. But more on this later...... :)

Basically, Rhizome has one full time developer, which is me. We have a part-time developer who we outsource other projects to and we bring in interns when we can (and these interns provide incredible assistance!!!). But overall we are a very small number of people doing a lot of things at once. Our code is custom, so that means that adaptability can be slow as I work to balance out all my numerous duties.

I ALWAYS welcome suggestions/criticisms/ideas. Feel free to email me at anytime.

Thanks and best to all!

Deadline:
Mon Jun 15, 2009 17:46
Reporting to Rhizome's Director of Technology, the Tech Assistant position helps with the wide variety of tasks needed to maintain and develop the Rhizome site. These duties include updating and/or creating both static and dynamic pages, answering member inquiries, researching usability improvements, server management, and defining new website features. This position also assists with implementing each season's major tech projects, including an upcoming overhaul of Rhizome's ArtBase and the Rhizome website itself. This is an ideal position for a candidate seeking to hone their professional skills in programming, IT and web development.

The Tech Intern must be based in New York and must be able to commit to 16 hours of work per week, for 6 months, beginning in July 2009. This position is unpaid, but academic credit may be arranged.

QUALIFICATIONS: Candidates must be have technical experience in web design and/or programming. The position requires strong knowledge of HTML and CSS, and some familiarity with PHP, Javascript, and MySQL.

TO APPLY: Please email a cover letter, resume or c.v., and one reference to Nick Hasty at nick.hasty(at)rhizome.org.
http://rhizome.org/info/internship.php
DISCUSSION
Posted on Thu May 28, 2009

If you were previously subscribed to this list, you have been automatically re-subscribed.

If you wish to stay subscribed to this list, then you do not need to take any further action.

If you do not want to subscribe to this list, please copy and paste this link into your browser:

Or click the link at the bottom of this and all forthcoming emails.

If you encounter any technical issues, or have any questions, please let me know.