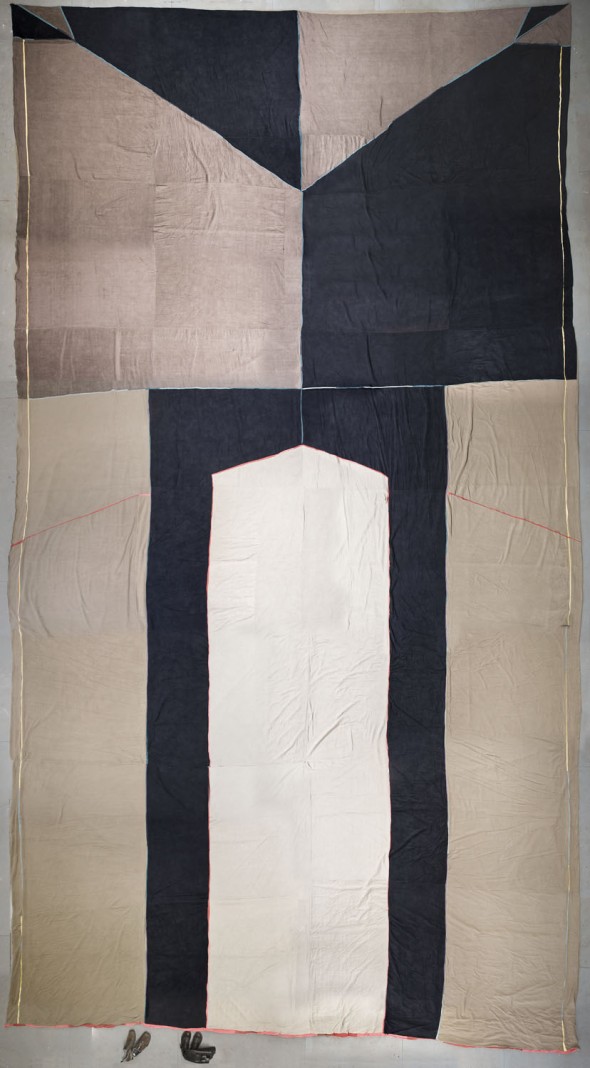 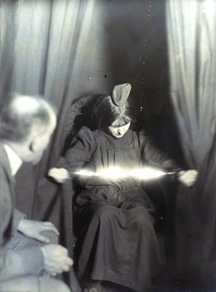 Direct communication from mind to the external results in ... 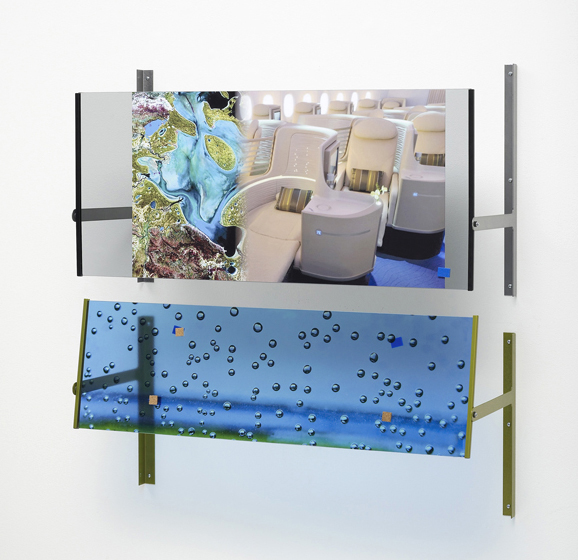 The images that you show most often have digital origins, whether combined and assembled into one image, transformed into the surface of a physical object, or edited into sequence as moving image. What is the importance of using digital images (and sound, in the case of your films) as opposed to their analog predecessors? Are your sources always culled from the Internet? If so, do you gather them systematically? How do you refine the selection?

The images, textures and surfaces I reconstruct or redeploy are sourced from the ‘contemporary global arcade’. When my work considers the internet, it is to think of it as at once a tool that presents access to a commons, and also a globalised shop, the ‘autocracy of choice machine’... images/sites are bought by multinations, searches made first fall on what the engines have as priority, the majors are all linked, many of the interesting images disappear as websites go down, and there's matters of copyright and how the virtual is policed, etc… with all this in mind and the fact that as I say this, it's outdated, I follow streams to find the right tone for the work. Talking formally, the different pixel or image qualities give a porous or dense cadence to the video or collage. It’s the same with the sound in the videos. It is edited, leaving the glitches at the edge to force the screen to represent the materiality of digital production or cut and paste editing. I use what I have access to...ideas of access are obviously a moot point with regard to global social economics and therefore the possible agency of the collaborator, actor or author.

The industry and economy of objects seem to figure into ...

12:17 A video welcome from Mayor Bloomberg: technology and art are vital to the city's fabric and "best of luck to all of the contributors."

12:19 HTC's Scott Croyle speaks: it's the journey that drives him; the construct of artists and technologists coming up w/ an idea and presenting them today exemplifies that journey. He introduces Lauren Cornell, Executive Director of Rhizome. She presents Rhizome's context as "all contemporary art that engages technology," and a broad conversation between art and tech that has grown since the mid-90s. She juxtaposes that context with a summary of E.A.T.'s 9 evenings in 1966 (performances and music by Rauschenberg, Rainer, Cage), a time when engineers and artists seemed much farther apart.

She recounts a conversation w/ a technologist this year who was excited about not creating a product and an artist who wanted "to create a hot start-up."  Presentations to follow on what these teams came up w/in a day.  Lauren ends by thanking the people, corporations, and organizations involved in making Seven on Seven happen, and introducing Douglas Rushkoff, the keynote speaker.

12:27 Douglas: an artsier Apple = an Apple less open for artistic intervention. Anyway, he's happy to play around w/ the HTC phone he received. He recalls joining the geeks (those who tended to turn sharp corners while walking in straight lines) in 1976 as an artsy theater guy to try programming, but "using computer science to solve mathematical problems" wasn't enough of a motivation to really get him hooked or to understand programming's scope. Being in California in the late 70s introduced him to the artier, psychedelic, hard-core math/computer science folks in ... 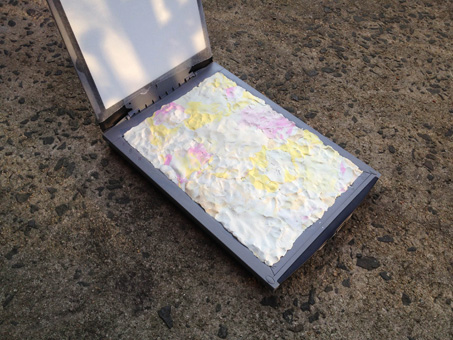 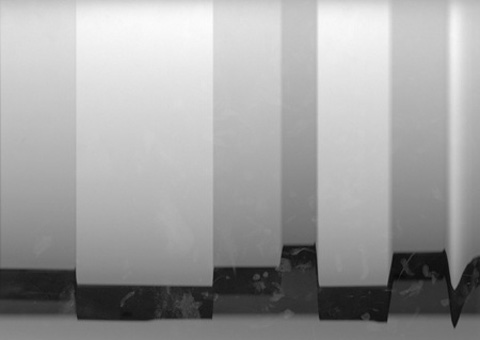 Rhizome asked Travess Smalley and Jo-ey Tang, two artists with digitally-based work in the upcoming group exhibition "The Untouchables" at Saamlung in Hong Kong, to answer the same question(s) via email.

Surface is a theme of this show: is there a particular way you connect the visual elements of your pieces to something non-visual? Considering each piece has a digital and physical aspect, would you expand on the relationship between the two forms? What do you consider your pieces to be made of (e.g., substance, bit, concept, etc.)?

Travess Smalley: I have always looked for ways to bring the home office into my studio practice. I mean, for most artists the home office holds many of the tools we use on a day-to-day basis -- inkjet printer, scanner, personal computer, even scotch tape and staples. I've always felt that my role as an artist and creator would be somewhat dependent on these tools. I mean, it's always been easier for me to find a mouse than a paintbrush.

Of all the home office devices, the printer/scanner is the most interesting to me. These are the two devices that convert the digital to the physical and back again. They are one of the few ports where the visual can get in and out of the separated digital and physical worlds. The printer and scanner have been my most important tools for the past few years. From my experiences and processes using them for artistic ends, I have come to think of my relationship to them akin to a contemporary printmaker. A home office printmaker perhaps. I've developed an understanding and elaborate choreography of process that attempts to blur the line of these convertors ... 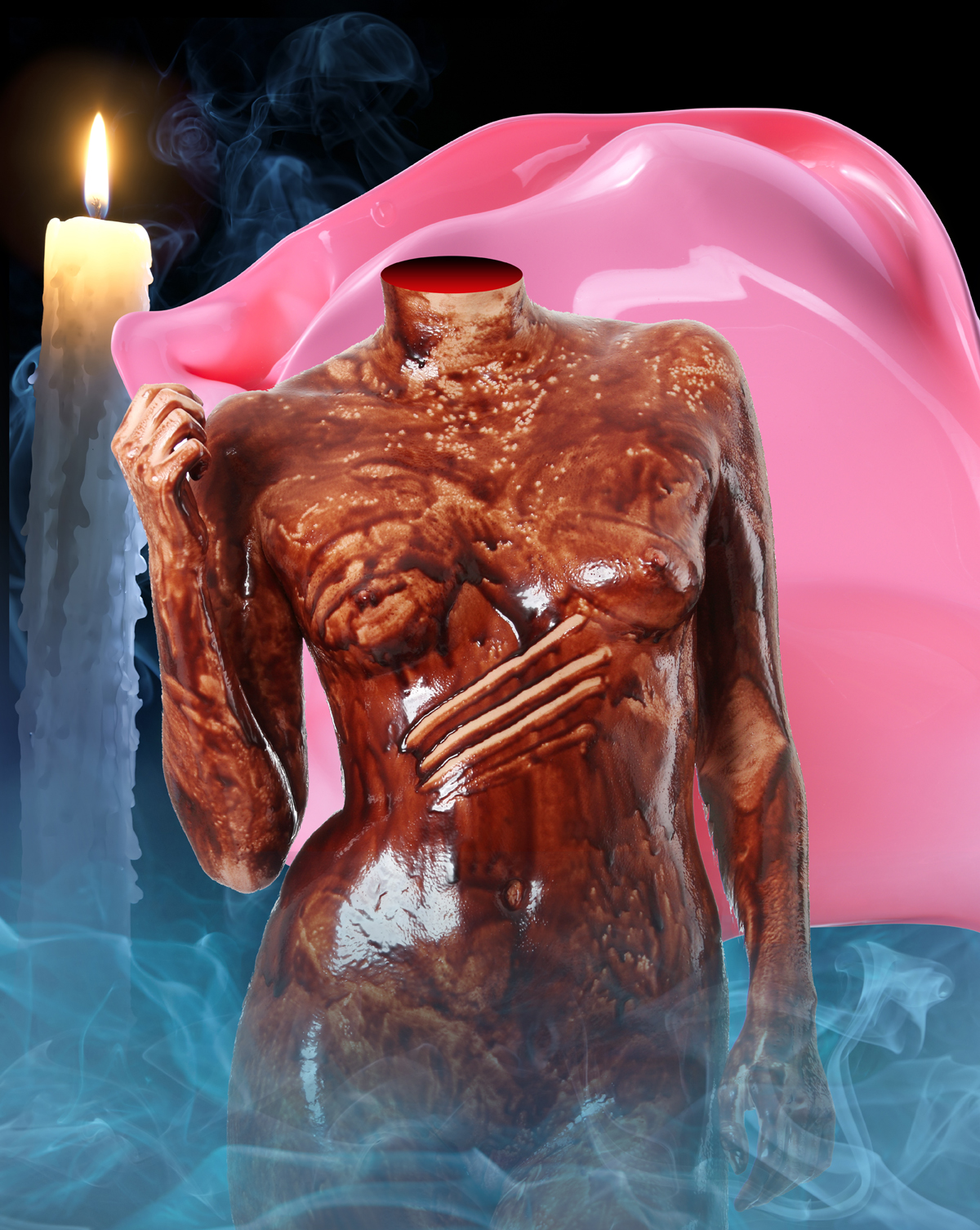 Your photography and sculptural installations use image manipulation, often resulting in disconcerting perspectives. What is it that draws you toward "making the photograph 'other'" as you write in your artist statement?

I guess this impulse comes from a drive to reevaluate the predominant media via which so much of our culture is produced and disseminated. The conceptual drive in the work both online and off, two dimensional and three, has a lot to do with the ways in which photography creates appetites for physical objects that are then fulfilled to varying degrees of success or failure by the objects themselves — in particular, commercially manufactured objects. In a way, I see the objects and materials I use in the sculptural work function as images themselves. Similar to the tools used in Photoshop or other editing software, many of the objects we interface with on a daily basis come with prescribed uses. I believe that hidden in these prescribed uses are assumed ideologies that through misuse, omission or recombination can be revealed, reconsidered, or at the very least, interrupted.

Popular Options (Yellow Diamonds in the Night) at klausgallery.net shows a Flash animation of the most searched Google items in 2011. Those searches offer a glimpse of zeitgeist. What in particular are you approaching with this montage?

In Popular Options, my aim was to access a kind of snapshot of a culture via its preferences — a time capsule generated by the desires of a population rather than it's aspirations. I wanted to let what we were searching for coalesce into a singular audio/visual experience. While aesthetic decisions were made for the purposes of continuity or ...